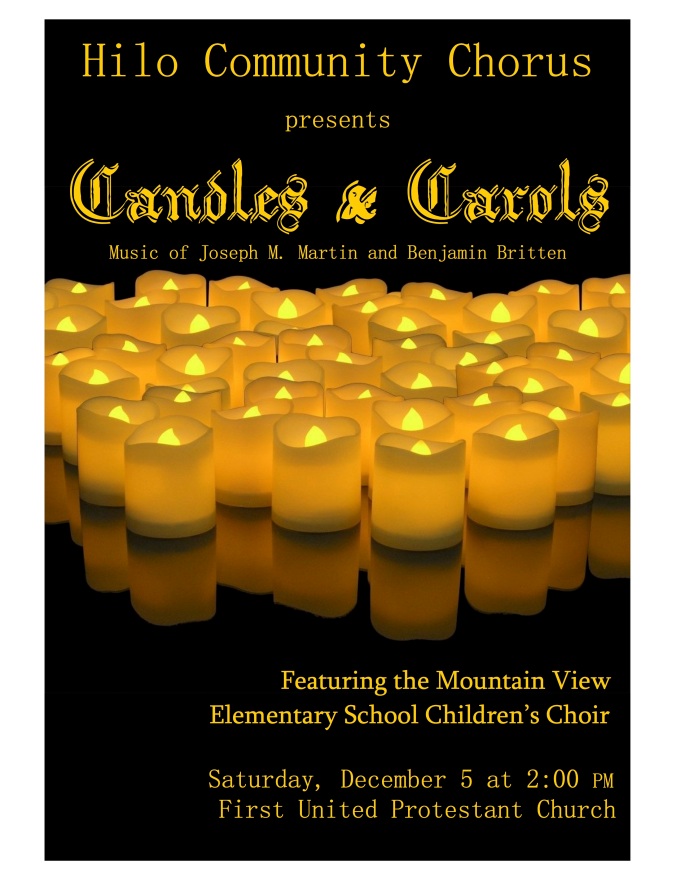 Mountain View Elementary Children’s Choir, under the direction of Jennifer Tsuji, will be featured guests.

Joseph Martin’s imaginative new work “Ceremony of Candles” uses carols and candlelight to embody the hope of Christ. Featuring orchestration by Brant Adams and narration by Pamela Martin, carols featured include: In the Bleak Midwinter • Silent Night • O Come Little Children • What Child is This? • O Little Town of Bethlehem • and many others.

“A Ceremony of Carols, Op. 28”, is a choral piece by Benjamin Britten, scored for chorus, solo voices, and harp. Written for Christmas, it consists of eleven movements, with text from The English Galaxy of Shorter Poems, edited by Gerald Bullett. It is sung in Middle English, and will include accompaniment by harpist Tatyana Shapiro Leiste.

THIS IS A FREE CONCERT.  (A calabash will be available for those wishing to make a donation to the chorus.) 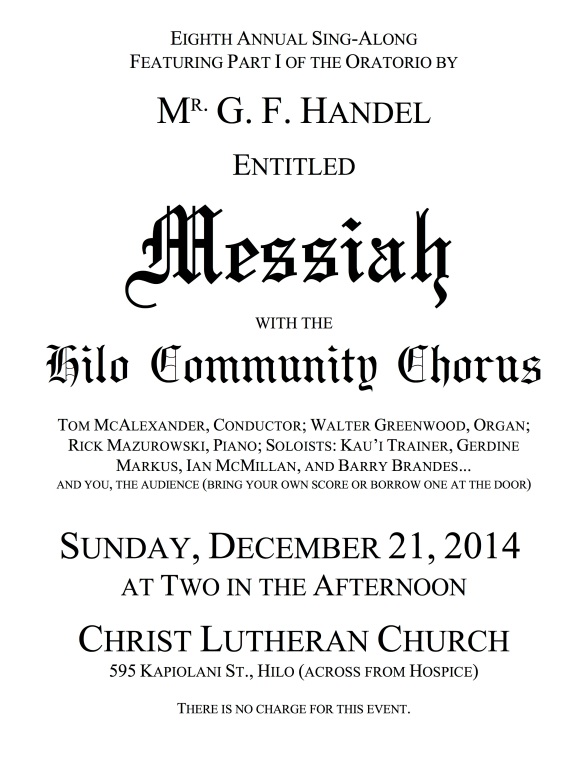 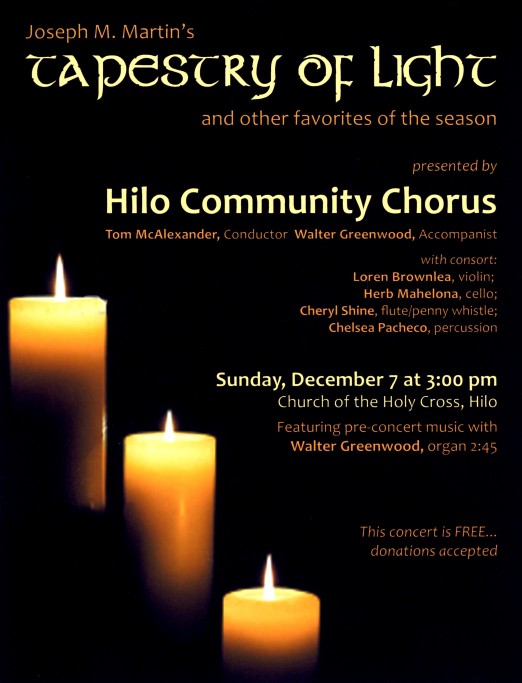 The Hilo Community Chorus, conducted by Tom McAlexander and accompanied by Walter Greenwood, will present its annual holiday concert on Sunday, December 7 at 3:00 PM at the Church of the Holy Cross in Hilo. However, you will want to arrive early–by 2:45– to hear pre-concert music played by Greenwood on the fabulous Holy Cross organ.

The program opens with “Christmas…In About Three Minutes,” consisting of a number of snippets of well-known carols. You will be asked to count them, so be ready! Following will be several familiar carols as well as some fresh off the press. Members of the Chorus will be featured as soloists in several of the songs, and three members of the Christ Lutheran Church Bell Choir will join in a new arrangement of “I Saw Three Ships.”

In the second half of the program the Chorus will present Joseph M. Martin’s “Tapestry of Light: A Celtic Christmas Celebration.” They will be accompanied by a Celtic consort of Greenwood on piano, Loren Brownlea on violin, Herb Mahelona on cello, Cheryl Shine on flute and penny whistle, and Chelsea Pacheco on percussion. As in the first half, solos will be sung by Chorus members. In “Tapestry,” Martin, who will be in Hilo next October, has taken very familiar Celtic tunes and added new words to tell the Christmas story. Members of the Christ Lutheran Church Chancel Choir will join with the Chorus in this presentation.

This concert is free. It is presented as a gift to the community. 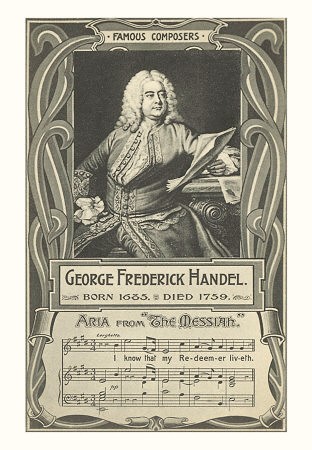 Why do people stand when the Hallelujah chorus from Handel’s Messiah is sung? Legend has it that the tradition began when, at the first London performance of Messiah in 1743, King George II happened to be present. He stood up (presumably overcome by the majesty of the music), and when the king stood up, everyone was expected to stand up, and the custom has carried through the years. Actually there is no record of King George II or any member of the royal family ever attending a Messiah performance. The legend is based on a letter written decades later by someone who was not present at the performance but who had heard the story from a friend who claimed to have been present. And so the legend was born.

This year, on Sunday, December 22 at 3:00 pm, the seventh Messiah sing-along will occur at the Church of the Holy Cross, 440 W. Lanikaula St. in Hilo. The Hilo Community Chorus will join the audience in singing the great choruses from Part I, the Advent/Christmas portion of the oratorio, with the addition of the Hallelujah chorus from Part II and Worthy Is the Lamb/Amen from Part III. The choral numbers will be conducted by Tom McAlexander, and the accompaniment will be provided by Walter Greenwood, organ; Rick Mazurowski, piano; and Armando Mendoza, trumpet. Soloists are Kaui Trainer, soprano; Gerdine Markus, alto; Pedro Kaawaloa, tenor; and Barry Brandes, bass.So bring your own score, if you have one, or borrow one from the church as you enter. Or, if you prefer, just come and enjoy the music. You may sit with your section (look for the signs on the pews), or sit wherever you please. And should you stand during the singing of the Hallelujah chorus? Just follow your heart. 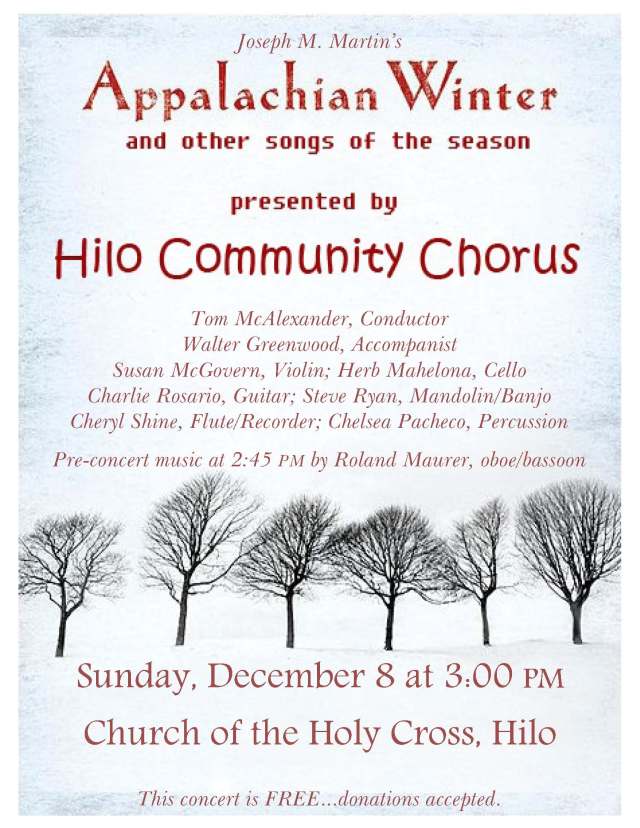 Please join us for our annual Christmas concert this Sunday December 8 2013 at the Church of the Holy Cross, 440 W Lanikaula St, Hilo, HI 96720.

THE CONCERT IS FREE, and there will be calabashes available for a free-will offering.

For more information about the concert, please read the post below. 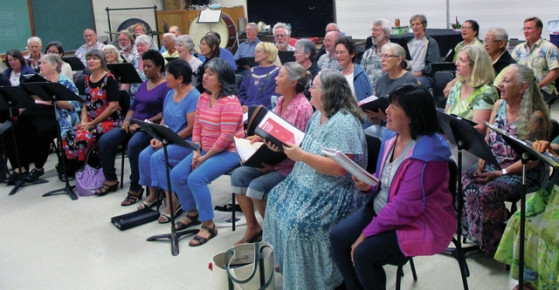 The Hilo Tribune Herald published a nice article about our upcoming concert ! Click the above link to go the Tribune Herald website. The photo is from a recent rehearsal and was taken by our conductor, Tom McAlexander. Tom also wrote the press release that was used for the story:

The Hilo Community Chorus will present “Appalachian Winter and Other Songs of the Season” in concert 3 p.m. Sunday, Dec. 8, at the Church of the Holy Cross in Hilo.

“You won’t want to miss these outstanding musicians, so come early and enjoy.”

Maurer and Greenwood will also begin the second half of the program with Ennio Morricone’s “Gabriel’s Oboe.”

The concert promises to be varied and entertaining. The music for the first half of the program consists of new carols or new arrangements of old, familiar carols, all composed or arranged in the 21st century.

There will be two medleys of familiar carols; a blending of “Jingle Bells” with music from Tchaikovsky’s “Nutcracker Suite,” two new madrigals, an Irish “jig” carol and other carols, familiar and new.

The second half of the program features Joseph M. Martin’s “Appalachian Winter,” music that celebrates the legacy of early American carols and hymnody, including Sacred Harp tunes, Shaker hymns, and Appalachian melodies. A “bluegrass style” consort will accompany these songs.

The consort is composed of Walter Greenwood, piano; Susan McGovern, violin; Herb Mahelona, cello; Cheryl Shine, flute and recorder; Charlie Rosario, guitar; Steve Ryan, mandolin and banjo; and Chelsea Pacheco, percussion. The piece (and concert) ends with a rousing rendition of a blend of “Children, Go Where I Send Thee” and “Go, Tell It on the Mountain.”

The concert is free with calabash. For more information, call or email McAlexander at 985-7192 or tommac@hawaii.rr.com.